What a great Saturday…Nicole was hanging out with Nate in the morning which meant our shopping trip was planned for later in the afternoon.  I was able to have a relaxing morning, included a 2-mile run (no leg cramping! yay!) and have time to also be productive in getting some chores done as well.  Love mornings like that…:D

Of course, no good day starts without an equally good breakfast!  I’m still on a roll with this apple ‘n’ oats thing.  I can’t get enough of it.  And it keeps me full for hours which most breakfasts never do.  The same old, well-loved mix includes:

All cooked together, then topped with:

I think I’ll be eating this until either I get incredibly tired of it or something new and exciting comes along that keeps me just as full. 😀

I sipped this iced coffee with soy while chatting with the parents.  I love weekends with no chemistry.  I think I could seriously get really used to it. 😀

So, like I already mentioned, I really enjoyed today’s run.  I wanted to go further…much further…but knew that I shouldn’t be increasing my weekly mileage more then 10%, and I already was just by doing the 2 miles.  This week I covered 11 miles compared to last week’s 8.  But that was a low week…still…no injuries is my ultimate goal!! 😀

After my run I wanted water…and watermelon!  So I had a nice big bowl full of the sweet and juicy fruit, which completely hit the spot.

Lunch had to be equally refreshing because it was just that sort of weather!!!  I made myself a nice big salad with the works.  On top of all the green leef lettuce and spinach I had…

And on the side were the beloved kashis. 😀 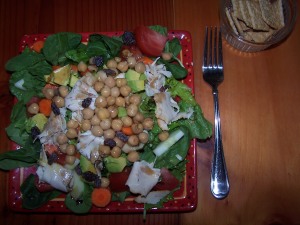 I was kind of planning on washing the cars after that, but…it didn’t really happen.  I decided instead to focus on finishing up the ironing, watered the garden, and made dad and Matthew supper for tonight.  I just couldn’t let myself go out for a fun weekend and leave them behind with nothing.

I used to buy an all-natural taco seasoning mix at the grocery store but haven’t been able to find it.  I was super disappointed, because I refuse to buy Old El Paso.  Some of the ingredients are less then stellar, and I didn’t know what alternative I had to making a quick ‘n’ easy taco meal.  Does anyone know of any homemade recipes for taco seasoning that taste really good?

Instead I bought McCormick’s taco brand which taste extremely similair without all the hydrogenated oils and mispronounced chemicals and additives! 😀  It is still a little high in salt, but just watch the salt intake for the rest of the day. 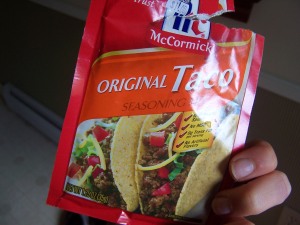 Considering Matthew is a vegetarian, I used kidney beans in place of the beef/turkey and first sauteed some peppers and vidalia onions in about a T. of EVOO.  It made a nice big batch…great inside a burrito.  I hope they liked it!

Nicole came over around 3’ish to pick me up.  I was all packed and ready to go.  I absolutely love spending the weekend out with her.  I was looking forward to it all week.  Shopping + girl time + chick flick movies (aka “Bolt” in this case…haha…not exactly a chick flick, but it was so cute) + good food + 2 adorable cats = guarenteed fun!

We shopped a lil’ before heading to Panera for lunch.  I’m kind of boring when I go out to eat here because I always love the same sandwich.  I tell myself to try something new, but the Mediterranean Veggie Sandwich will always call my name.  There’s just no preventing it. 😀

So that’s what I got.  I substituted whole grain bread and had black bean soup, an apple, and an iced latte on the side.  Yumm…

After shopping some more and picking up some stuff for tomorrow morning’s breakfast, we headed back to the apartment to watch a movie and just relax.

This totally hit the spot…Edy’s X-treme PB icecream with some banana slices.  Mmm…

Thanks for having me over Nicole!  I had sooo much fun. 😀

Have I ever said how much I love these two furbabies?!?  They never fail to make me laugh and smile.  Nicole adopted both of them from a shelter when they were still little, and they’re almost a year old already.

This is High St.  Such a prince…haha.  He insisted on cuddling this morning and with a face like that, how could anyone say no??? 😀

And this guy is hysterical and such a cuddle bug too.  I’m such a proud “aunt.” 😀

Hope you’re all enjoyin’ the weekend! 😀