Spending the weekend at my sister’s place is a lot like being on a mini vacation. 🙂

Last night we went to Olive Garden, where I ordered the chicken parmigiana with whole wheat pasta, along with salad and breadsticks.  That was after spending almost 1/2 an hour in the frozen isle of the grocery store, trying to figure out what we wanted to eat for dinner.  😀  We have this problem where both of us our incredibly indecisive.  Both of us tell the other to decide and that “anything sounds good.”  Somehow we ended up spending all that time discussing dinner and left the store with only a movie and a bunch of bananas. 😀

Considering I had a heavy meal last night, I was expecting to wake up wanting yogurt and fruit or a smoothie…but, nope, oatmeal is what sounded the most appealing.  I was super hungry and us girls had a long day of shopping ahead.  I was happy to find a big container of oats in Nicole’s pantry, and she was nice enough to let me use some other ingredients to make a filling bowl of goodness:

I made it on top of her adorable stove.  I think it’s the cutest little thing…love it. 😀 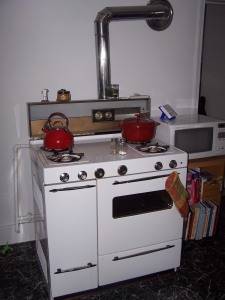 On the way to the mall, Nicole and I sipped on these smoothies.

It’s like a reeses peanut butter cup in smoothie form. 😉

Nicole and I were in shopping heaven at the mall.  Neither of us bought much (although there were some super good deals that were very tempting.)  And I think it was this chandelier in the bathroom that made me the most awe-struck. haha…this was what we both decided to call the “ritzy side of the mall.”  There was even a sweater in one store for $1,050!!  That was definite fun window shopping only!

I did find a cute pair of shorts for $11 though… I was pretty happy. 😀 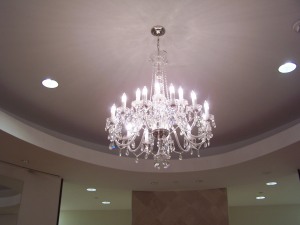 And of course, FREE ICECREAM DAY AT FRIENDLYS did not go by unnoticed.  Nicole and I hit it up at around 12’oclock.  Watermelon Sherbet was exactly what I was in the mood for.  Mmmm…

Nicole and I arrived back at her place around 2’ish and decided to pick up subways on the way, and ate it at home.  Subways has some healthy options and is a nice choice when you’re out on the road (and it tastes way better then mcdonalds or burger king!…not to mention leaving you more full and content with more nutrition.)

I ordered a grilled chicken breast sandwich on honey oat bread with all the veggie toppings (minus the jalapenos) and mustard.

Then I waved goodbye to Nicole, and headed home.  I’m already looking forward to the next time I can sleep over at her apartment.  I had so much fun and it was so nice to have some girly time with my best friend and sis.  Can’t wait to see you again soon, Nicole! 😀

I knew I immediately wanted to go for a short run when I came home.  It was georgeous outside, and dinner was planned to be later tonight.  So I had a small little snack of puffins and soymilk before going.  The perfect amount of energy and crunch! 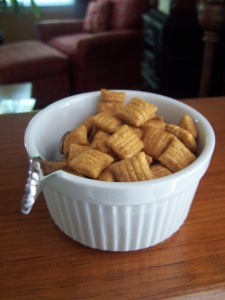 The 2-mile run felt sore but in a good way.  I ran further yesterday then I have in a while, so I wanted today to be just enough to stretch out and loosen up.  And that’s exactly what it turned out to be.  Followed by some light stretching, I felt nice and energetic afterwards. 😀

We bought a chicken from a local farm where they’re raised free range (literally ‘free range,’ as in you can see them roaming in a grassy field.)  I followed weber’s beer can chicken recipe to grill it (which was my dad’s job to keep an eye on…I’m not a grill cook, that’s for sure!)  We also grilled the corn.

And I had a huge salad with just orange juice for a subtle flavoring, along with a few olives, carrots, cucumbers, tomatoes and red onions.  Everything hit the spot perfectly.  I was craving veggies so it was nice to have a big plate full of ’em. 🙂

The best parts of the corn are the charcoaled spots. 😀

Later tonight I was having a craving for more veggies.  So I made a mini version of the Green Monster.

Tomorrow being Sunday, I usually plan on having a relaxing day off from everything.  But not this time!  I’m afraid my to-do list is getting slightly carried away and I really need to buckle down with it.  Once I’m done, I know I’ll feel sooo much better!

Hope you’re all enjoyin’ the weekend! 😀

Exercise: short little walk with Nicole this morning (+ lots of walking around the mall!), 2-mile run before supper (nice and easy!) and a 4-mile after-dinner walk with mom.

Now it’s time to relax a little before going to bed.  Hopefully I can get an early start tomorrow! 😀

7 thoughts on “Weekend with the Sister…:)”