I have a slight confession to make.  I can’t eat raw bananas.

I think this problem originated back when I was a little girl and found myself biting into a green, very under-ripe—not talking just a little under-ripe here, folks!—banana.  My face squirmed up as my tongue felt like it had instantly been shriveled and dried.  Not even water could help.  Considering the fact that I was expecting to bite into a sweet, marhsmallow-y banana, this incident proved to be quite traumatic (nobody had told me that green bananas weren’t as perfectly sweet as their yellow counterparts…lesson learned.)  I haven’t eaten a raw banana since.

That being said, today was the closest I’ve come to eating a banana all by itself, outside of mixing one with yogurt or oatmeal (in which I think the banana is the most heavenly fruit of all.)  Of course, the banana was smeared with peanut butter, layered with chopped dates, doused with dark chocolate hunks, and lovingly sprinkled with coconut.  Just in case it wasn’t quite ripe enough, I wanted all of the bases covered.

Nestled near the fire pit, I waited patiently.  Flipping the banana around once in a while to allow it to heat evenly, while also allowing the banana to get warm and gooey.  That was, after all, kind of the point.

The peel started to blacken and shrivel, and I was suddenly struck with the smells of toasted coconut mixed with warm chocolate and peanut butter.  Time to eat my not-so-straight-up-raw-banana.

It was just as wonderful as it sounds.  Highly recommend trying this for your next campfire adventure.  Preferrably with a very yellow banana that has been speckled with brown age spots.  It’s the sign of a perfect banana. 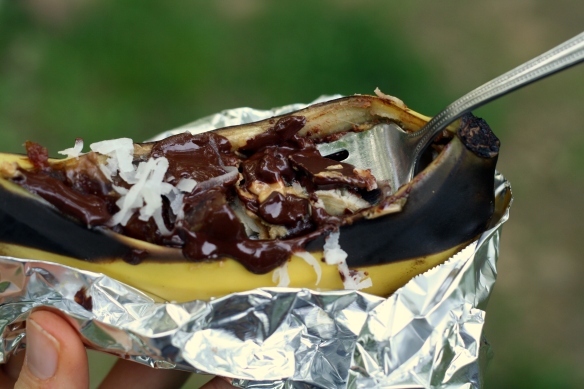 So yes, I am one step closer to eating a straight up banana.  Obviously I still have a ways to go.

Question: Do you eat straigh up bananas or do you usually mix them in with something else?

14 thoughts on “one step closer”