I slept so much better last night, and woke up feeling refreshed and energized.  I practically bounced out of bed, ready for breakfast!

I had to be at the hospital by 7:45, so I decided to stick to what works for breakfast this morning…these oat cakes were put together and eaten in about 15 minutes.  I was quickly out the door, ready for my morning with the RD… 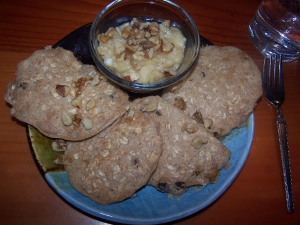 I shadowed the RD for a good 4 hrs.  There was a lot of inpatient work, and I was able to see the ins and outs of what an RD does.  I know I would personally prefer doing one-on-one counseling, but could also picture myself starting out with working in a hospital.  I have to say, that my favorite part of the whole day was visiting the maternity floor, seeing the newborns, and listening to the RD give out information to new moms. 😀  I also enjoyed visiting the geriatric floor.  One elderly woman eagerly wanted to see if she could have tomato soup with noodles as part of her regular meals every day. 😀

All in all, it was an interesting day.  I especially appreciated the fact that the RD I was shadowing didn’t glamourize the job.  She showed me a real, typical day.  It isn’t always 100% fun, and there are a lot of meetings and paperwork involved too.  But there’s also a lot of good stuff too.  It helped to remind me why I’m going through so many science classes and that my love of food and people is what got me into this career choice in the first place! 😀

I stopped in the cafetaria with her this morning to get a cup of coffee.  She had an important meeting at noon, so we worked through breaks/lunch.  I was hungry by the time lunch finally did roll around, so I was glad that I had packed this lunch last night.  I ate the granola bar on the ride home, and dove right into the salad and grapefruit slices when I was sitting down at home.  In today’s salad mix:

Feeling that hungry for lunch was again, a little strange for my usual schedule and habits.  I found myself feeling a little too tired instead of my usual energetic self.  But after the food finally settled in my stomach, I felt re-energized and headed out for a 4-mile walk with mom. 😀  Today was absolutely perfect outside!  It felt like an early autumn day…cool, breezy, blue skies.  Beautiful! 😀  Mom and I had some interesting conversation as always, and both decided that it would be a good idea to go out and pick up some Father’s Day Gifts this afternoon.

I’m super excited about what I decided to get him, but in case he’s reading this post, I’ll have to wait to share it until next week. 😀

I blended up this smoothie mix before going shopping, and took it to-go… 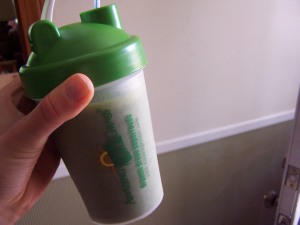 I was feeling in need of something warm and comforting this afternoon while shopping, and still a little hungry too.  Starbucks completely drew me in…so I ordered a tall soy latte.  Hit the spot. 😀

For dinner tonight, I wanted something quick ‘n’ easy.  So I went with some kiwi slices, some homemade whole wheat walnut-raisin bread toasts (x2 because I was still hungry after eating), and a “fried” egg (1 whole egg + 1 extra egg white.)  Sometimes breakfast for dinner meals are so tasty and satisfying. 😀

I had an overpowering urge to RUN tonight!  So I did. 😀  And I had one of my most favorite runs yet.  The first 2 miles were a little tough, as I was working out kinked up muscles and sore legs.  But from the 2nd mile on, I was experiencing the most wonderful runner’s high.  I was grinning from ear to ear, and felt as if I could run forever and ever.  It sure made up for that very tough run I had a couple days ago.  Those horrible, tough runs make the good runs even more enjoyable. 😀

I think part of what helped was that I took a quick walk breakat the two mile mark.  It gave me a chance to catch my breath, stretch out my legs, retie my shoes, etc.  Sometimes I’ll tell myself to keep running and that walking in between is ‘cheating.’  Cheating who?  It’s totally okay to plan and take a walking break, especially on miles that are longer then you’re used to or on an especially tough run.  It can really help you recoop and keep going when you know there’s a walking break coming up soon. 😉

Tonight I wanted a slightly larger then normal snack to make up for my busy day and to avoid any “I’m so starving I could eat an entire cow” feelings later tonight. 😉  So I went with about 1.5 c. Barbara’s Shredded Spoonfuls, some milk, and a spoonful of peanut butter.  Yummay…love cereal for a crunchy snack. 😀

And, lastly, I’m just now noshing on some carrot sticks.  🙂

I have a busy day for tomorrow.  It’s technically my “day off” since I won’t be going to the hospital, but I’ll be heading over to help paint my grandparent’s shed since we’re finally expecting a completely dry day with no rain in between.  Should be fun…although I have to say, me and a paintbrush can be a scary mix. 😉

Can you believe tomorrow is already Humpday???

Exercise: 4-mile morning walk with mom…filled with gabbing and chatting and laughing. 😀  Then later, there was a wonderful 4-mile run which felt really, really good!  I need to always remember these good runs…they’re usually the best motivator to get me out there when I just don’t feel like it!! 😀

You ever have one of those days when you see this too early?  Or maybe an even smaller number? (horror, horror!!)

I pride myself on the fact that I’m usually a morning person.  I can get up early, not drink coffee, and be absolutely fine and peppy.  That wasn’t me this morning though.  I was up for most of the night, continuosly checking out my clock to see if the alarm would be going off soon.  Then 5:45 came around, and I was up and out of bed.  By 6:10 I was showered and ready for breakfast…and even by that point I would have preferred crawling back under the covers then heading to the kitchen.  That’s when I know I’m tired. 😉

Last night I prepared this morning’s breakfast so it would be super quick.  I mixed all the dry ingredients together for my oat cakes…

…and simply added the soymilk this morning.  While the pan was heating up, I mashed the banana and added some walnuts on top for dipping.  Once the griddle was nice and hot, on went the pancakes.  And they came out super tasty this morning because I cooked them much less after I flipped them.  They were just slightly doughy on the inside, and I really, really like them that way. 😀

I considered having a bowl of cereal at first because my stomach wasn’t really with it this morning.  I was over-tired and feeling a little anxious about volunteering at the hospital for my first day (It’s worse then when I first started school…haha 😉 ).  But then I figured I could probably use the extra food for fuel during the long morning since I didn’t know when I’d be eating next. 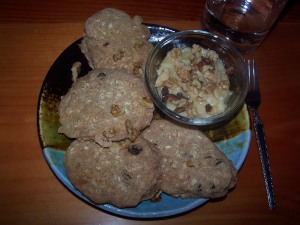 Last night, in addition to creating a headstart on my breakfast, I packed a hodgepodge of a lunch.  I wasn’t sure if there would be breaks, if I’d be eating in the cafetaria, if I’d have a lunch, etc, so I decided to bring some various things along.

All packed neatly into this handy case. 😀

The food service manager went over the sales, inventory, and other businessy sides of the food distribution with me today.  It was interesting to see and get an understanding of, since I have no idea when it comes to vendors, brokers or procurement among other things.  I took a ton of notes, and plan on going back for Friday…

1:00 came and went, and I realized that I was getting super hungry.  I can see now, why its recommended not to go beyond 3-4 hrs without eating.  I was going on 6-1/2 hrs without food, and I could have done some serious damage in the kitchen. 😉  I almost melted when I saw a plate of chocolate brownies cross in front of me as it was being prepared by the workers, and the smells of bacon and eggs were tantalizing me.  I don’t even like bacon!  I would have been willing to eat anything within eyesight, now that my blood sugar was dropping and my stomach was rumbling.

Lesson learned?  I’m going to bring along a soft snack that doesn’t make noise so I can discreetly munch on it if we’re in the middle of a discussion or reviewing the inventory or what-not.  I’m going to need something to tide me over and keep me going so I don’t get so crazy hungry. 😀

In addition to my packed lunch that I finally ate when I came home around 1:30, I also ate this big salad with garbanzo beans and a tsp of olive oil and balsamic vinegar.  By that point I was finally full and content…whew! 😀 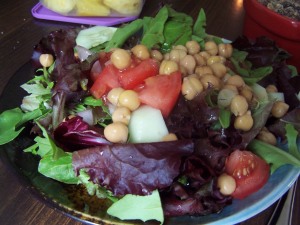 I headed out for a 4-mile walk to beat the thunderstorms we’re supposed to be getting later.  I was hoping to fit in a run, but my eyelids are practically drooping.  So a nice walk sounded perfect, along with some light yoga.  I’m determined to be able to do the crow pose eventually. 😀

For a snack later on, I had a toast with 1/4 an avocado and fresh black pepper. 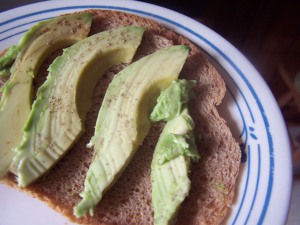 Making dinner is such a relaxing activity for me…especially when there’s not a huge rush or nobody in the house is too starving (that’s when we resort to eating half cooked veggies or crunchy rice…;)…thankfully that doesn’t happen often, haha.)  Tonight I had plenty of time…:D

There was some wild caught cod on sale for really cheap last weak at the supermarket, so I picked up two pounds worth for tonights meal.  It’s so easy to prepare a nice simple dish…for 2 lbs. of fish, I simply melted a T. of butter, and sauteed one onion in it.  Then I poured it on top of the salted & peppered cod in a baking pan (coated with spray), and cooked in a 350 oven for 16-25 minutes (depending on thickness…it should flake a little when it’s completely cooked.)

On the side I had roasted brussell sprouts (cooked in a T. olive oil with salt and pepper) and a whole grain blend of rice.

And the finale was a graham cracker square with a pat of peanut butter and some swirly chips. 😀 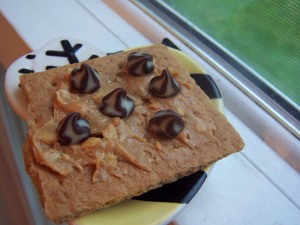 I need to check out my homework assignments tonight and get ready for tomorrow’s day with the RD.  I’m really excited, and hoping I can get some sleep tonight too! 😀

Exercise: 4-mile walk + very light yoga.  I’m hoping for a good run or x-long walk tomorrow because my legs are feeling restless and because it’s supposed to be in the 60’s and sunny by tomorrow afternoon.  Woohoo!! 😀